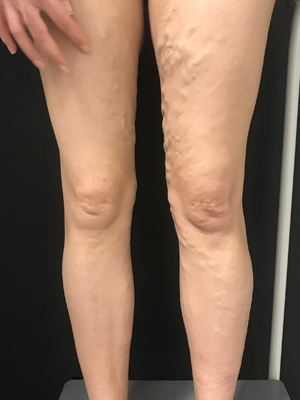 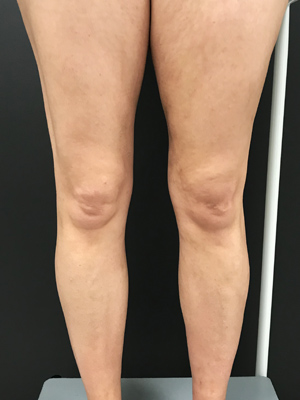 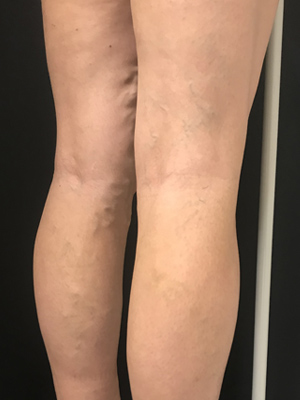 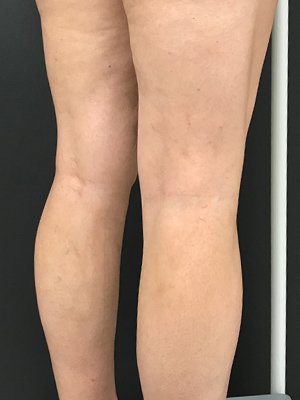 This 40-year-old female patient presented with large bulging veins in both thighs and lower legs. Her primary concern was the unsightly aesthetic appearance of the varicose veins but on further questioning, she revealed that she was experiencing heaviness, tiredness and throbbing in the lower legs.

As a medical assistant, her occupation involves constant standing daily and for hours on end. By the end of the day, her legs were extremely fatigued, and it would take several hours of leg elevation to make them feel better. Duplex Ultrasound examination revealed an underlying feeding vein (referred to as the Great Saphenous Vein), which was directly feeding the surface varicose veins in the thigh. This was a staged treatment process and involved firstly the Endovenous Laser Ablation (EVLA) of the Great Saphenous Veins, followed several weeks later with Ultrasound Guided Sclerotherapy of the surface tributaries and directed Microphlebectomy of the larger surface varicose veins.

The EVLA procedure on both legs took just under an hour to perform and was performed under local anaesthetic with the patient able to walk immediately after, with her class 2 compression stockings on. She was able to return to normal duties and was told to expect some slight discomfort and bruising in the legs. Ibuprofen was prescribed for any ongoing discomfort. Her two follow up appointments to treat the surface veins in each leg, lasted about an hour again, and were 2 weeks apart from each other. The patient was told to expect some temporary bruising from the treatment and some localised discomfort that usually responds to taking Ibuprofen.

The after photos were taken 18 months post-treatment. The patient is extremely happy with her results, both from a cosmetic perspective but also from a health perspective. She no longer has symptoms relating to venous disease and is able to function at high capacity both at work and with her leisure activities.

The team at Vein Health will continue to monitor her over the next 5 years or so, with Duplex Ultrasound scans to ensure that her legs remain healthy. Beyond that point, she will be placed on a long-term review.