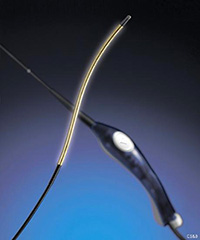 Radiofrequency Ablation (RFA) is one of the 2 Medicare Approved minimally invasive techniques for the treatment of major veins, previously treated by stripping surgery. As with Endovenous Laser Ablation (EVLA), RFA relies on thermal (heat based) damage to the vein, that leads to immediate closure of the vein. Once the vein is treated by RF Ablation, it will gradually undergo complete absorption by the body and disappear over time.

With ultrasound guidance, an RFA fibre is placed into the abnormal vein through a tiny incision. The vein is then numbed with local anaesthetic, and the RFA fibre is activated. The RFA Fibre has a unique design and consists of a 7 cm length active tip, through which the RFA energy is released. The vein wall is heated along this 7 cm length section of the RFA Fibre. Generally speaking, the fibre is activated for 20 to 40 seconds for every 7 cm length of vein, making the whole procedure quick and easy to perform. The release of Radiofrequency Energy from the tip of the Fibre, produces a thermal reaction in the vein wall along the treated section, resulting in collapse and sclerosis of the vein wall with minimal discomfort afterwards.